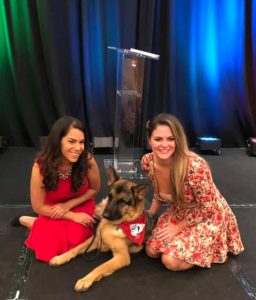 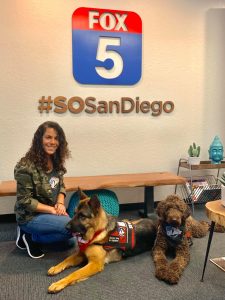 We were honored to have Veteran Michelle Rivera and Gentle Ben, one of the Patriotic Service Dog Foundation pups who were supported by funds raised at the 2018 Gala & Auction. Michelle and Gentle Ben arrived with Tom and Terry Tackett, founders of Patriotic Service Dog Foundation, located in Murietta, CA. Not only did Ben make his debut on stage as Michelle sang karaoke with Roger Clemens, but the pair also met one of the donors, Karley Mize, who helped fund the training and care of Gentle Ben.

This is one of many busy months for Michelle and Ben, recently she made an appearance on Fox 5 in San Diego with Patriotic Service Dogs Gentle Ben and Jackel. During the program, she represented women Veterans, minority Veterans, combat Veterans and Veterans with PTS. Michelle says she is aiming to turn post-traumatic stress into post-traumatic growth. Learn more about the Patriotic Service Dog Foundation at PatrioticServiceDogFoundation.org.
By Mary Dorn|2019-10-04T18:24:40+00:00October 3rd, 2019|News|0 Comments