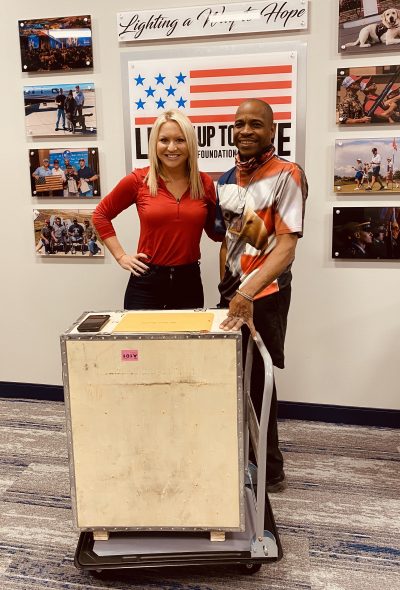 December is a time of coming together and of giving. So, Light Up To Live was proud to be able to do just that for one of our military heroes. This month, we proudly presented Army Veteran and Adaptive Training Foundation graduate, Keith Murphy, with a polychromatic light system and a big surprise, a new EZ Lite Cruiser Wheelchair. When the Light Up To Live board learned Mr. Murphy needed a new chair, our team went into action to find ways to help.

Mr. Murphy has always been one to help others and sought to serve from a young age. He was a Cub Scout, Boy Scout and joined the ROTC. At the age of 18, he enlisted in the Army. He served for four years as a Sergeant, specializing in Infantry, Mortars. He was deployed to Korea, where he met his now-wife and later returned to the Dallas area where they started their family. Mr. Murphy became a truck driver and was enjoying life’s journey.

On August 28, 2018, while on a motorcycle ride on a beautiful afternoon, everything changed. Mr. Murphy was struck by a vehicle that made an illegal left turn as he was driving through an intersection. “The last thing I remember is being put into an ambulance and waking up in the hospital 8 days later,” he said in an interview to US Veterans Magazine. Mr. Murphy had been severely injured. He had many broken ribs, pelvis, hip, and back as well as a collapsed lung, severed leg, and dislocated shoulder. While doctors tried to save his leg, they were forced to amputate it in order to save Mr. Murphy’s life.

For six weeks, Mr. Murphy was in the hospital recovering. He recalls it not only being a time of incredible pain but also a time that was a very dark place for him. On October 16, 2018, Mr. Murphy was cleared to go home. While he was hurt, he decided his recovery was up to him and he was determined not to let those injuries or a reckless driver beat him.  He began working out and then reached out to Adaptive Training Foundation (ATF), a non-profit organization that helps people with disabilities transform their lives.

Mr. Murphy went three times a week to ATF and then joined the nine-week program they offered with 11 other Veterans. “At ATF, positivity is contagious, and being around others who have endured similar injuries has been incredible for my mind, body, and spirit,” Mr. Murphy told US Veterans Magazine. “If you show up and put in the work, there’s no way to lose. Their team is determined to see you win.”

Today, he is still working towards his goals and striving to push himself to be healthier in every way. Light Up To Live is proud to be part of helping Mr. Murphy do just that with the gift of his new PLT system and wheelchair. We hope others see how he has found a path and in that are inspired and have hope as they travel their own road to recovery.